Update: This story has been updated since it was originally posted. See below for new information.

Counterbalance park, at the corner of Queen Anne Ave and Roy St in Uptown, was graffitied early this morning, covering both the south and west facing walls of the “urban oasis” in red spray paint and the letters “BTM” and “3AK.” 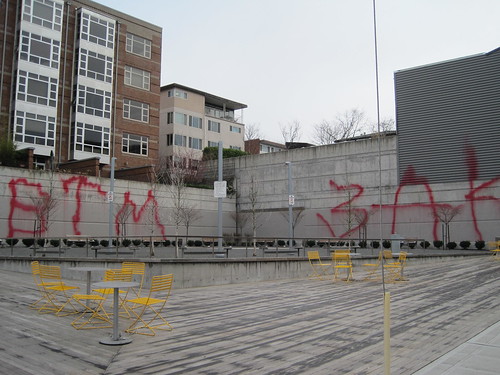 By 10 a.m. Seattle Police Department officers and Parks and Recreation representatives were on the scene. According to officer C.J. Lang, they believe the vandalism happened after 3 a.m. this morning. 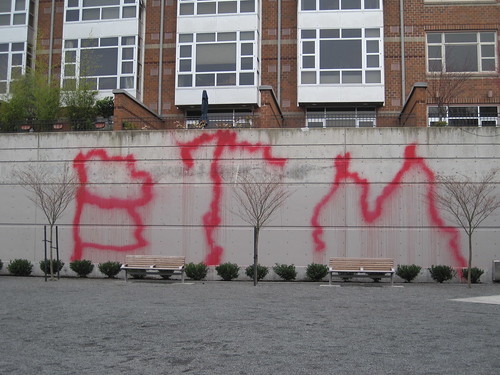 Though the actual park is city property, Lang said, the walls belong to the condominium bordering the park. According to a parks department representative, the condominium has agreed to take care of the damage. 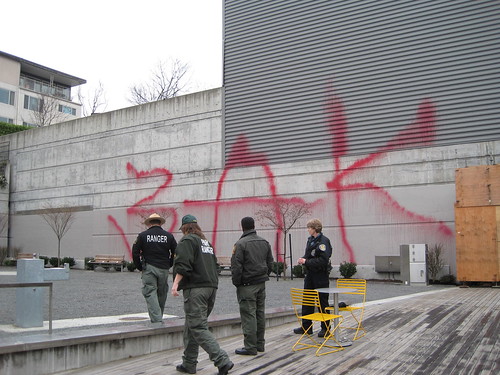 As for who is responsible, SPD is still investigating.

Several readers wrote in this morning disturbed by the vandalism.

“I’m so sorry to report that this morning on my walk to work I saw that someone has vandalized the uptown park at the corner of Roy and Queen Anne Avenue,” Sarah wrote. “It is such a shame that someone would ruin this community park with graffiti.”

(Thanks to tipsters Sarah, Cliff, Sean and Josh!)

Update 11:06 a..m.: The manager of The Willis condos bordering the north wall of the park and the Barclay Court business building to the east, Alex Braun, is working to remove the damage today. “I always try to get the tags down as soon as possible because that ruins their game,” he said. 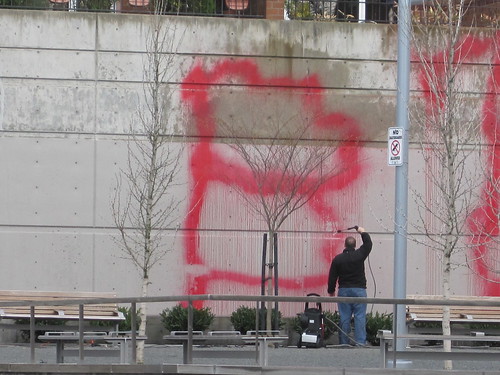 Braun is pressure washing the first 11 feet of the walls, which have been sealed to keep out paint, this morning. Fortunately, he said, the paint is relatively light and hasn’t had a chance to set into the concrete yet due to the cold temperatures. After brushing over a portion of the tag, some of the red paint loosened, a good sign that they will be able to restore the wall quickly. If that doesn’t work, they’ll repaint over it, he said.

As for the unsealed concrete above the 11-foot mark, Braun said he’s called in a graffiti removal specialist who will be coming to the park either late this afternoon or first thing tomorrow morning.

“We only sealed it to 11 feet because we thought that was going to be enough,” Braun said. “These taggers usually don’t go around with ladders. They usually repel down over freeways, but that’s hard to do here…concrete is like a sponge–it just sucks it up. If you try to remove it without knowing what you’re doing, you could make it permanent.”

Braun says this is the second largest tag he’s seen in the park since he began managing both bordering buildings 11 years ago – the largest one happened back in 2000. He said the park walls have been targeted before, most recently two months ago, but the tags are usually small and he has been able to remove them before many notice, something he believes discourages repeat offenders.

“They spend a lot of time and effort to make these tags, so if you take them off, they may come back a second time, but they rarely come back a third,” he said.

As for the taggers, Braun said no one in the condos overlooking the park or in the surrounding businesses saw anything. “From 2 until 4 a.m. this is like a dead zone. My condo faces Queen Anne and I can count the cars that go by here between 2 and 4 on one hand.”

Though, Braun said he did remember seeing a similar tag on northbound I-5 just before the convention center just yesterday. “The paint was dripping down…it looked just like this,” he said.