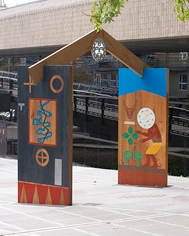 The recently completed Thomas Street Pedestrian Bridge is benefitting from SDOT’s 1% for Art, with a dedication of a new custom artwork on Sunday, November 18. The Office of Art & Cultural Affairs commissioned the work from artist and storyteller Roger Fernandes. Snoqual/Moon the Transformer illustrates a story told by local Puget Sound Salish tribes and will serve as a entry gateway to the Thomas Street Pedestrian Bridge at Thomas St and 3rd Ave W.

Fernandes is a member of the Lower Elwha Band of the Klallam Indians. He’ll be at Sunday’s dedication, discussing the piece and telling the Salish story of Snoqual that inspired it. His work relates to art, language, ceremony and story. He tells Native American stories for his tribe and other tribes of the Puget Sound area.

Snoqual/Moon the Transformer is a wooden construction that artistically conveys elements of a story told by Puget Sound Salish tribes – Snoqual came through the world and transformed it to what it is today. The gateway is composed of two carved and painted cedar panels connected by a cross beam centered by a metal cutout of Snoqual’s face.

“There are certain cultural, philosophical and historical points this artwork tries to address. One is that local Puget Salish culture accounted for dramatic change in the world as articulated by the Snoqual story. Another is that the Natives saw the powerful transformations wreaked by invading European and American cultures and would sometimes refer to them as “Snoqual.” Another is that the Native cultures and their arts are impacted and influenced by new technologies, and that Native artists are quick to respond to such developments. Culture is never static.”