Remember Thumper the lost tortoise? After 6 months, he’s back! 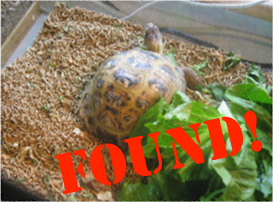 Hey readers, this may ring a bell – remember Thumper, the missing John Hay classroom tortoise? He went missing back in September from a Queen Anne yard, and was never found… until now!

The little guy apparently dug his way underground and stayed safe & sound over the winter months. He must know Spring is around the corner, as he re-surfaced (literally) in the same yard he disappeared from back in the Fall.

From the John Hay teacher via David Nelson at the Seattle P-I Inside Belltown blog (thanks, David!):

“Thumper’s Back: After 6 months, Thumper has dug himself up from the same place he disappeared. He will join us back in the classroom soon. We are delighted he’s back. If only he could tell us about all his dreams over the past 6 months. This year’s class has never even met Thumper. Better late than never. He burrowed himself down more than 12 inches deep in the garden bed.”

Not being learned in the ways of herpetology, I had to look this up – apparently “turtles and tortoises can hibernate up to a full eight months of the year, depending upon latitudinal location” per the Herp Care Collection. Thumper did the right thing – it got cold and he took action!