Spot a bee swarm? Here’s what you need to know

The bees are buzzing around Queen Anne, and it’s the season for bee swarms. Jeff Steenbergen, a local Queen Anne beekeeper and Trustee for the Puget Sound Beekeepers Association (PSBA), has written a great, informative article on honey bee swarms and how local beekeepers can help relocate these newly formed colonies of bees. I’m turning the post over to Jeff today – all the info you need to know is below, the swarm pictures are courtesy of his blog.

With recent losses to bee populations worldwide seeing a few bees around the garden is something to celebrate, but what do you do when a few thousand bees show up?  Longer days bring a surge of blooming trees and flowers which create a short window of time for healthy honey bee colonies to split and create new colonies. When a colony splits beekeepers call the part that leaves the hive to a temporary location a swarm.  Swarming is the natural process that honey bee hives go through to create new colonies and spread their genetics to new locations. If you can remove yourself for a moment from the frightening concept of 10-15 thousand bees hanging on a branch or off the side of a building a swarm can be an amazing experience to observe. 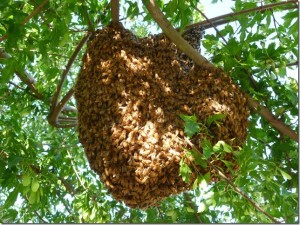 The swarming process starts when the queen lays eggs in several cells that will be used to raise new queens. These eggs will take 16 days to mature and the mother queen will need to leave several days before the new daughter queens emerge, battle and the strongest takes over. However the mother queen can’t leave as soon as she lays these eggs and needs to prepare herself to leave the hive by stopping egg production so she will be light enough to fly to a new home. Flying is something the queen only does after she emerges to mate and possibly again later in life if her hive is successful enough to swarm.

Once the mother queen is ready she will fly out of the hive a short distance and will rest on something branch like usually several feet off the ground. She will be followed by about 2/3 of the bees in the hive that will go with her to build a new home. At this point the separation is final and the process of finding a new home begins for the swarm. While it may just look like a big mass of bees they are actually doing something quite amazing and they are making decisions on possible new home locations to select the best one. The oldest bees scout new locations and present options to the members of the swarm and in a matter of a few hours or sometimes days they will pick a new home.  During this time the queen is protected but is not part of the decision making process, in fact she doesn’t know where the new home is until she is guided there with the rest of the swarm! 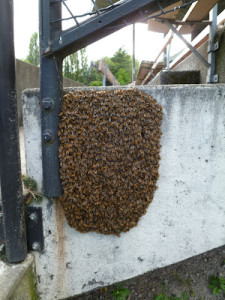 Swarms are vulnerable outside the hive to weather, animals and more importantly people and need to find a new home quickly. In a rural setting this is usually a hollow tree but in the city with loss of habitat this can take the form of a wall or attic where they become a problem.  If you encounter a swarm it is important to call a beekeeper quickly before they leave to a new home.  While many services can remove bees from inside a wall it is usually a fatal process for the colony as it is very easy for the queen to become injured during the extraction process. Pollinator numbers are dropping at alarming rates and every swarm presents an excellent opportunity for each of us to help them succeed.

Beekeepers offer FREE pickup and removal of swarms that are easy to reach and usually show up surprisingly fast for people that also have a day job.  Local beekeeper clubs annually publish beekeeper numbers on swarm lists by area and should be your first resource to finding a local beekeeper. If you are unable to find a local bee club or swarm list try calling a non-emergency number like the local fire department and they should be able to point you to the local beekeeper for your area.  If you have a swarm list follow the directions listed there which usually are to call beekeepers until you get someone to confirm they can drop everything to rush out to save the swarm.  While you wait for the beekeeper the best thing you can do is get your camera ready and make sure people stay 10-15 feet away from the swarm.

When a beekeeper arrives they will remove the swarm by transferring them into a hive box.  Bees in a swarm are less likely to sting because they have nothing to defend and are gorged with honey so they have energy to build a new colony. The beekeeper may work bare handed or in a full suit to transfer the football sized swarm of bees into a hive with a shake of a branch or by the handful if they are on a wall. Once the majority of the bees are in the hive the beekeeper will wait for any stray bees to find their way into the hive box before closing the hive up to take to their new home.

If you are in the greater Seattle area please refer to the Puget Sound Beekeepers Association (PSBA) swarm list to find a beekeeper.

If you are outside of the Seattle area you can refer to the Washington State Beekeepers Association (WASBA) website to find a local swarm list.