The Emmer & Rye building has been vacant since it closed in October 2012, but something is happening at the house at 1825 Queen Anne Ave N. A colorful new paint job is in the works, bright red flowers were installed today on the building, and the Emmer & Rye menus have finally been taken down.

Thanks to a tip from a reader (thanks, Aaron!), we know that there’s a Craigslist posting for a new Mexican restaurant on top of Queen Anne.

Since the restaurant space in the Towne isn’t yet leased, we’ve done some sleuthing (aka walking up and down Queen Anne Ave to identify potential restaurant spots). Then, another anonymous tip came in late last week that there was some painting activity at the location.

The painters working on the building today told me “it’s a restaurant” and when I asked if it’s the new Mexican place, the answer was “yes” and they’re painting the outside to get ready for the opening.

No response from the Craigslist listing owner, but it sounds like training and prepping the space will take place this month for a mid-June opening. 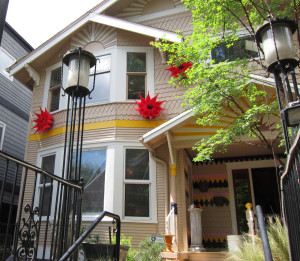 The Craigslist listing describes the new restaurant as “traditional Mexican food with accents of American fare. We will be working with family handed down recipes and new food concepts. We will be serving Lunch & Dinner 5 days a week (Wednesday -Sunday).”

Right now, we’re piecing together activity at Emmer & Rye, the Craigslist post, the friendly painters working on the outside, and fresh patio paint – it all adds up to a rumor, but one that may likely prove true. Stay tuned!