Entre Amis no longer open for business on Queen Anne 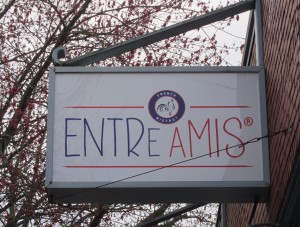 Late last week, a reader let us know that Entre Amis would be closing yesterday, Sunday, August 2nd. I contacted owner Benjamin Bernard-luneau and he confirmed that the rumor was true. However, up until last night, he was hopeful there would be an alternative to closing the popular French restaurant on Queen Anne Ave N.

Unlike most of our business closings, this one has nothing to do with rent increases or retirement plans. Benjamin needs to return to France for a bit, and until he can find someone to “keep the concept of Entre Amis alive”, the restaurant will remain closed.

He hopes to come back to the restaurant or find someone to run it in his absence. As of today, Entre Amis is shuttered. Benjamin wanted to pass along his thanks to all of the Queen Anne residents who dined at Entre Amis since it opened this past Spring.