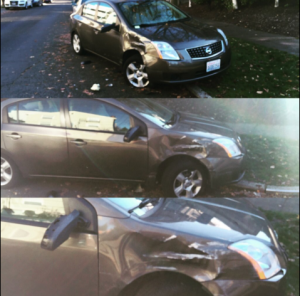 Yesterday, we had several reports from readers on a car chase led by a car rolling only on its rims and a tour bus on a rampage, crashing into cars along its route. Plus, reports of helicopters over West Queen Anne and Interbay.

Turns out, it was all the handiwork of one suspect. He started the chase in a stolen car near the Magnolia Bridge, taking off down Elliott Ave. He then stole a tour bus (shuttle type) near the waterfront and headed to Queen Anne. The chase ended when he crashed into another car in the 3200 block 14 Ave W.

Photos to the right are from a reader via Twitter, showing the damage left on Queen Anne in the wake of the chase. Full write-up of what happened is below, from the SPD Blotter:

Officers arrested a 34-year-old man after he was spotted in a stolen car, stole another vehicle and crashed into multiple cars in the Queen Anne neighborhood.

Witnesses called 911 just before 10:30 Friday morning saying there was a car hidden behind some bushes in Ursala Judkins Viewpoint Park. Arriving officers checked the plate and discovered it was attached to a stolen car.  They tried to contact a man who was in the car’s driver seat when he put it in gear and sped off. Officers followed the stolen car as it careened through a fence and into a patrol car.  Officers briefly lost sight of the car until they saw a large plume of smoke above the car driving on just its rims in the 100 block of Elliot Ave. W.  Officers called off the pursuit due to the suspect’s increasingly reckless behavior.  Officers followed a trail of damaged cars, and even a Metro bus, to the  suspect’s stolen car near a parking garage near 1 Ave. and Bell St.

Another victim called 911 minutes later after the same suspect pulled them from their van and sped off from a hotel at 2100 Alaska Way.  The suspect continued fleeing until he crashed into another car in the 3200 block 14 Ave. W causing the van to catch fire. The suspect exited the burning van and used a fire extinguisher to stop the flames.  Officers eventually arrested the suspect not far from where he crashed the van.

Medics took the suspect to Harborview Medical center for injuries sustained in the crashes, however no other injuries were reported.