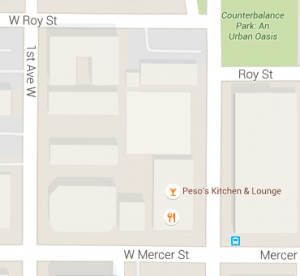 According to the Seattle Police Department, a person was shot at 1:30am this morning (Monday, December 28th) behind Peso’s Restaurant & Lounge at 605 Queen Anne Ave N. The victim was shot multiple times and transported to Harborview.

The suspects (one or more, number unconfirmed) escaped in a black vehicle, described by KOMO as a black Cadillac.

Here’s the current write-up from the SPD Blotter:

Officers are investigating after a man was shot early Monday morning in Lower Queen Anne.

Police received multiple calls of shots being fired near the 600 block of Queen Anne Ave N at 1:30 AM. Officers located a victim in the alley behind and performed first aid until the Medics arrived.

Medics transported the victim to Harborview Medical Center for treatment of serious injuries. Officers processed the scene for evidence and recovered shell casings.

Witnesses said that an altercation from a bar moved outside and into the parking lot behind when they heard shots fired. The suspects left southbound in a dark colored vehicle.

If you have any information about this case, please call the Homicide/Assault tip line at (206)233-5000.