As part of the restoration/painting work on the Aurora Bridge, pedestrians, runners, and cyclists need to take note of an extended closure of the northbound (east side) sidewalk. This closure begins Monday, January 18th and runs through September. During this time, sidewalk-users will be directed to the opposite southbound (west side) sidewalk.

Reminder: there are also upcoming extended lane closures planned for Aurora between the Aurora Bridge and Highland Ave that start the same night, January 18th that are estimated to run 7-8 weeks. We will post a reminder about these closures shortly, the original heads up is at the bottom of this post.

Here are the details from WSDOT: 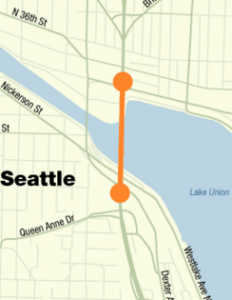 “Cyclists and pedestrians should prepare now for an extended closure of the northbound sidewalk over the State Route 99 Aurora Avenue Bridge in Seattle.

The sidewalk will be closed Jan. 18 through September with signed detours in place for cyclists and pedestrians.

The closure is necessary while contractor crews working for the Washington State Department of Transportation attach a containment system to the sidewalk for the Aurora Avenue Bridge preservation project.  Drivers may also notice the containment system which is a large tarp that will stretch up and over the bridge’s safety fence. The system is designed to keep paint and debris falling into the water below while crews repaint portions of the bridge.

A contact number and emergency phone for a vehicle pickup will be available at either end of the bridge to assist ADA users who are unable to use the cyclist and pedestrian detour.”