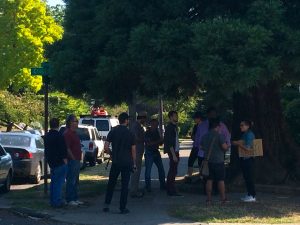 We’ve had several readers write in about a planned “National Day of Rage” protest on Friday, July 15th that lists Queen Anne Baptist Church as the Seattle location.

This particular protest was also held at Queen Anne Baptist Church in 2014. It is not organized by the church, and the turnout in 2014 was small, with fewer than a dozen protesters showing up (photo is from 2014).

Many non-official outlets are circulating a list of cities where these protests are taking place. The protest is scheduled for 4pm on Friday.

Please note that there are conflicting reports on what group is sponsoring this protest, with Snopes concluding [UPDATE: for those not in the know, Snopes is the source for debunking possible hoaxes]:

“As we pointed out back then [2014], one of the key aspects of Anonymous is its amorphous nature and overall lack of central organization; as such, anyone can initiate an Anonymous “operation,” and none is ever officially sanctioned by any particular portion of the collective.”