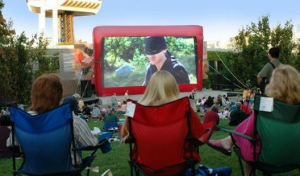 A summer favorite returns this weekend, with Movies at the Mural turning the Seattle Center Mural Amphitheatre into an outdoor cinema for summer Saturdays through August 27th. The free fun kicks off with a Princess Bride Quote-Along on Saturday, July 30th.

As always, this year’s summer series features popular movies, many appropriate for all-ages. Bring your low back chairs, blankets, or bean bags and set up a spot to soak in the summer Saturday evenings. Seating is first-come, first-serve, with movies starting at dusk (around 9pm). Picnics are welcome, and Armory vendors will be open to sell their wares for movie-goers.

Here’s the roster for the summer:

July 30: The Princess Bride Quote-Along
Rated PG
This beloved 1980s classic blends comedy, adventure, romance and fantasy.  Follow peasant farmhand Westley as he battles three bumbling outlaws and a nefarious prince to win the hand of his one true love, a young woman named Buttercup.  This special Quote-Along edition is brought to you in partnership with SIFF.

August 6: Mad Max: Fury Road
Rated R
The desert wastelands inhabited by the Road Warrior are still rife with motorized gangs in this fourth chapter of the Mad Max legend. When Max encounters a group of refugees fleeing for their lives, he joins them and their fiery leader, Furiosa in this apocalyptic story set in a stark desert landscape where humanity is broken, and everyone is fighting for the necessities of life.

August 13: Galaxy Quest
Rated PG
Decades after the success of the sci-fi series “Galaxy Quest,” the show’s washed-up stars – Jason Nesmith (Tim Allen), Gwen DeMarco (Sigourney Weaver) and Alexander Dane (Alan Rickman) — are recruited by actual aliens to pull off an intergalactic rescue mission. At first, the actors assume the so-called Thermians are just another group of die-hard fans. But as the plot thickens, they realize they’re working with real-life extraterrestrials.

August 20: West Side Story
Not Rated
Winner of 10 Academy Awards including Best Picture, this classic musical set among the tenements of New York City finds star-crossed lovers Maria and Tony caught in the midst of a turf war between rival street gangs.  Featuring music and lyrics by Leonard Bernstein and Steven Sondheim, and directed by Jerome Robbins.

August 27: Life of Pi
Rated PG
Based on Yann Martel’s best-selling novel, this coming-of-age tale recounts the adventures of Pi, an Indian boy who is the sole survivor of a shipwreck. While cast away, Pi is hurtled into an epic journey of adventure and discovery as he forms an unexpected connection with another survivor: a fearsome Bengal tiger.