Free summer Concerts at the Mural begin this Friday 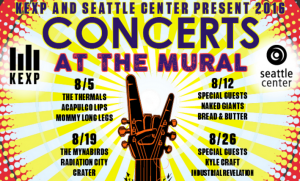 All concerts begin at 5:30pm on Friday evenings through August 26th. The performances feature both national and local artists. The concerts are all-ages and for those 21+, there’s also a beer garden, thanks to a partnership with Redhook. Plus, Seattle Center Armory food merchants will be open for both food and beverages.

Please note that seating is on a first-come basis. You can bring folding chairs and blankets, but leave large coolers/ice chests, umbrellas, pets, video and audio recorders at home.

Enjoy the summer with free live music on Fridays and free movies on Saturdays, all at the Seattle Center Mural Amphitheatre!