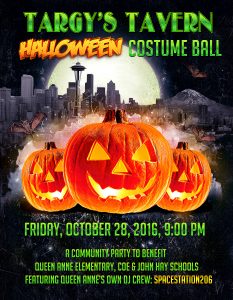 The kids have Halloween on Queen Anne Ave, but the holiday certainly isn’t exclusive to little ghouls and goblins on Queen Anne. For those 21 and over, Targy’s Tavern is hosting a Halloween Costume Ball next Friday, October 28th with live DJs spinning tunes for a Halloween dance party. Plus, proceeds go to local elementary schools, so the kids benefit too.

Each of the SpaceStation206 DJs has a unique style, so in addition to Halloween themed songs like Thriller and Ghostbusters, they’ll also play a mix of both current dance songs and old school 80s and 90s classics – last year, a conga line formed for Lionel Ritchie’s All Night Long.

The Halloween dance party begins at 9pm at Targy’s Tavern, 600 West Crockett St, with voluntary $10 donations accepted at the door. Costumes are encouraged!

Get your costume ready and head to Targy’s Halloween Dance Party next Friday!