Hey! The blog is back! After technical difficulties, normal operations are resuming… and, while we were away, the Seattle Sounders won the 2016 MLS Cup Championship! 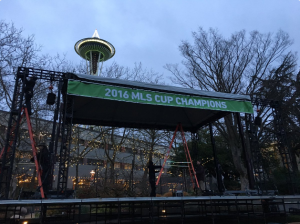 Tomorrow, Tuesday, December 13th, the victory will be celebrated with a parade from Westlake Center to Seattle Center, with a celebration on the lawn in front of the Seattle Center’s Fisher Pavilion at the end of the route. You can see the stage in its early state to the right, thanks to KOMO’s Ryan Yamamoto.