Update: Woman shot on Queen Anne was killed by husband, neither were Queen Anne residents 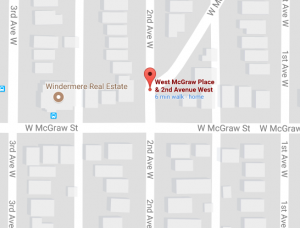 UPDATE: A few readers have attacked Queen Anne View for stating that the victim and suspect were not residents of Queen Anne. I’ve even been called a racist by one reader. First, I never mentioned the race of either the victim or suspect, so how someone could make this tragic situation about race is puzzling. As for providing the information that neither the victim nor suspect were from Queen Anne, it’s in response to reader inquiries – imagine someone was shot on your street, would you really have no desire to know if it was one of your friends or neighbors?

The Seattle Times has updated information on the shooting of a woman on Queen Anne early Sunday morning. According to court documents, the woman was shot in the head by her husband as they were taking an Uber through Queen Anne. They were residents of Hillman City, south of Columbia City and east of Beacon Hill.

An excerpt from the Seattle Times – full article is here:

“The couple got into an Uber car for a ride shortly after midnight Sunday, according to probable-cause documents. The driver said Jennifer Espitia sat in the front passenger seat and Cameron Espitia sat behind the driver.

The two started arguing, and the driver heard a loud boom, which he said he first thought was a tire blowing but realized it was a gunshot. Thinking he would be shot next, the driver asked Cameron Espitia where he would like to be taken, to which he responded “just drive,” according to court documents.

The suspect told the driver to stop near Second Avenue West and West McGraw Place, and then got out. The driver called police.”

Read the full story from the Seattle Times here.