Seattle Center Movies at the Mural start this weekend 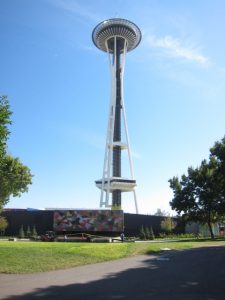 An annual summer tradition kicks off this Saturday, July 29th – Seattle Center’s Movies at the Mural. The free movies are displayed on a 40 foot screen at the Mural Amphitheatre, so get your blankets and low-backed chairs and grab a spot on the lawn for family-friendly movies under the Space Needle. Movies start at 9pm.

Here’s this year’s line-up – plus, a short film created by Cornish College of the Arts students will precede each movie:

August 12: Hidden Figures, PG
As the United States raced against Russia to put a man in space, NASA found untapped talent in a group of African-American female mathematicians that served as the brains behind one of the greatest operations in U.S. history.

August 19: Clue, PG
Six guests, a butler and a maid all meet at Hill House, where one Professor Plum works and the whole group finds themselves tangled in a web of murder, lies, and hilarity.

August 26: Rogue One: A Star Wars Story, PG-13
Knowing that her father holds the key to its destruction, a vengeful Jyn joins forces with a spy and other resistance fighters to steal the space station’s plans for the Rebel Alliance.  The future of the entire galaxy now rests upon its success.

Want to know what you can and can’t bring to Movies at the Mural? Information and answers to frequently asked questions are available on Seattle Center’s website.