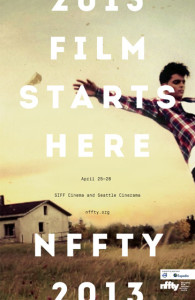 On Thursday April 25th, the National Film Festival for Talented Youth (NFFTY, pronounced “Nifty”) kicks off at Seattle’s Cinerama and then moves to the SIFF Uptown for 3 days of films. NFFTY is the premier showcase for directors under the age of 23, and occurs every spring right here in Seattle.

This year’s festival begins with a red carpet gala of short films at downtown’s Cinerama, followed by an after party at South Lake Union’s MOHAI. The films to be shown on opening night include works from the United States, Egypt, South Africa, and New Jersey. The after party is an all ages event, with hors d’oeuvres, and if you’re not one of the talented younger film makers, a cash bar too.

After opening night, NFFTY moves to SIFF Uptown. Over the course of the weekend over 200 films will be shown, with Friday including discussion panels on filmmaking in the digital age, as well as pursuing a career in film. Friday will also see Happy Hour Shorts, with a beer tasting compliments of Fremont Brewing beginning at 5:30pm, followed by the screening of several short films beginning at 6:30pm.

The films continue on Saturday, along with a Masterclass on Documentaries The Danish Way with award winning documentary director Pernille Rose Grønkjær, and the festival ends with the jury and audience awards on Sunday at 8:00pm. Tickets to the films and panels are $11 (10$ youth), with the opening night gala costing $35 ($25 youth). The awards ceremony is free and open to all.

Whether your tastes run to comedy, drama, sports, zombies, or local issues such as Referendum 74, NFFTY has something for you. Head on over to SIFF and see what the next generation of filmmakers can do. Check out the NFFTY 2013 Festival Trailer to get a taste of what’s to come.