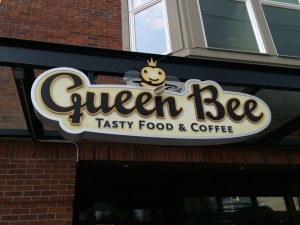 Crumpet café Queen Bee is planning to open its second location next month, bringing fresh crumpets and crumpwiches (signature sandwiches on crumpets) to Queen Anne. The crumpet and coffee shop is planning a mid-September opening in the Aegis Living building at 223 W Galer St.

Owned and operated by Aegis CEO Dwayne Clark, Queen Bee has an interesting backstory and operating model. While most retirement communities have retail located on-site, Queen Bee is designed to be a spot for all neighborhood residents – and it gives back to the community too. 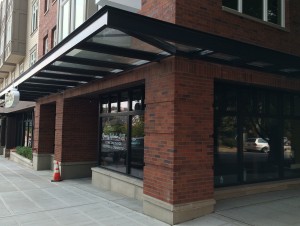 Queen Bee is named after Dwayne’s English mother, a line cook who was “the Queen Bee of the family”. With meager means, she fed her family with potatoes she got from work – and she paid back the potatoes with interest, instilling a sense of giving back in her family.

As a nod to Dwayne’s mother, traditional English crumpets make up the menu and giving back is at the core of Queen Bee’s business model – Queen Bee gives 100% of its profits to local charities. The charity changes quarterly, and first up for the Queen Anne location will be the Queen Anne Helpline.

Queen Bee’s menu is online, and you can also read about the original location on Yelp – it’s a popular spot over on E Madison. The Queen Anne café is designed to be a meeting place, dining spot, and take-out shop for crumpets and crumpwiches to go.

Queen Bee is “excited to be part of the Queen Anne neighborhood” and start giving back to the community. They’re planning a late September opening, so stay tuned for an official opening date and get ready to help the Helpline in Queen Bee’s first 3 months on Queen Anne!